What Did Cisneros Really Say About I-45 Expansion?

The Houston Chronicle said on its editorial page on October 15, 2019:

If she is re-elected, she hopes to be a strong voice against the Interstate 45 project as it’s currently proposed. No other district is as affected by the highway expansion, so its representative must be an active force in working to minimize any adverse effects as the project moves forward.

Hopes to be a strong voice?

Hope, as the saying famously goes, is not a method. Not in birth control, not in war, and not in politics.

Here is what she said about the I-45 expansion project on October 3, 2019 District H Forum co-hosted by Baker Ripley Leonel Castillo Community Center, Avenue and GO Neighborhoods Northside Houston, and Houston Super Neighborhood 51.

Osvaldo Corral, Noticias 45 Univision – Moderator: Knowing that the current I-45 expansion project will have a significant impact on District H, what is your position on the project, and what are you willing to do to ensure the best outcome for the community?

Karla Cisneros: This is going to have a huge impact on our community, in whatever happens, we will be stuck with it for the next 50 years, so it’s important to get it right.

There’ve been a number of different groups that have come together, you know, the I-45 Commission, the Make It Better, and the Stop I-45.

I’m still in the Make it Better area. I’m hopeful that when we see the results of the alternative plans that will be presented sometime soon, I hope … they’ll be … I expect to see that the input from this community that can be given back to TxDOT saying “this is what we would rather see.”

So, we haven’t seen that yet, but that’s what I’m really hoping that we will see. Because right now, the impact for this part of town, you know, is almost all negative. Further south, there’re some good things, but not up here. So, it’s not OK, it is not OK.

So, um, I, you know, I think we still … I’m waiting to see what that’s, what they say. But we will need to make very serious decisions about it.

Doing nothing is also not a good idea because it’s trapping water and flooding neighborhoods just, as you know, right now. Independence Heights is a detention pond, you know, out there, you know, and it’s water trapped because of the highways.

So, that’s just to say that we don’t want to nothing at all, that’s not right either. We need to fix the roads, we need to get it right. And we need to have a vision that really looks to the future, you know, and the way people travel in the future, not just now. Thank you.

This is not a forceful condemnation of the plan as-is. This does not sound like someone prepared to extend the fight.

This is hand-wringing and golly gee’ing I sure hope they listen to us.

THIS IS NOT THE LEADERSHIP DISTRICT H NEEDS.

The first Environmental Impact Statement (EIS) was announced in 2011. The schedule calls for the final EIS to be released later this year, 2019, circulated for comment, and then, a decision recorded.

There’s not much time left for input. TxDOT has not yet scheduled any meetings between now and year’s end.

Cisneros has been in office since 2015, and all she can say is that she is hopeful about what she might see and thinks we’ll have to make some serious decision.

I’ll point out once again the donation she accepted from the I-45 project company’s PAC on July 24, 1019, which perhaps explains her tepid and hesitant sort-of opposition: 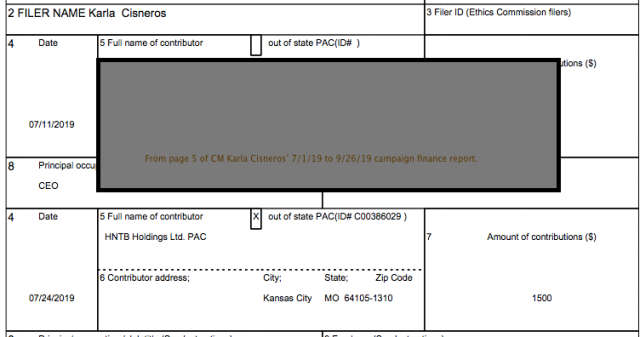 I personally have already made one serious decision about Cisneros based on her lack of leadership. I‘m voting for Isabel Longoria for District H. We need Longoria’s commitment to proactive community engagement. Even if it is too late for anything but minor changes to I-45, there will be a host of other highway, major thoroughfare, and bayou drainage projects on the horizon. We can’t afford hope as a method on those.

This entry was posted in Uncategorized. Bookmark the permalink.