Continuing the FB Fun with Rick Perry – And Why It Matters

But you know the good lord never closes the door without opening a window, right?

On this page, you can comment on the governor’s posts. And I suggest you do. Because bless his fuzzy little heart, he thinks he’s shut us up. 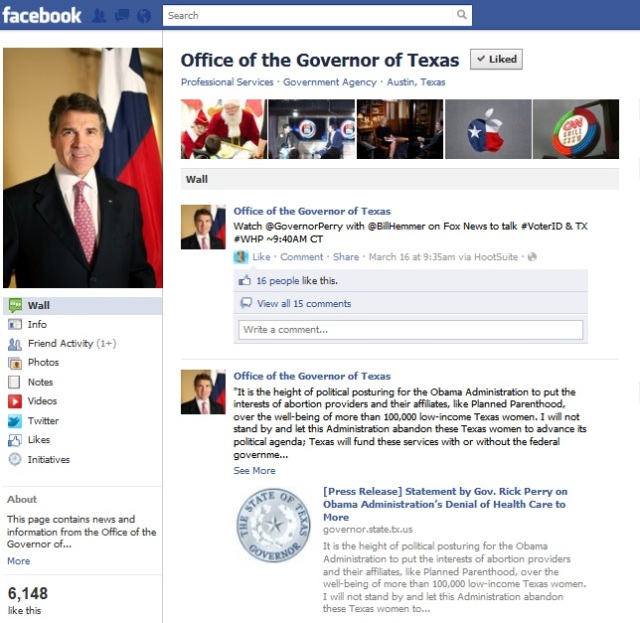 I’m sure that some among you are less enthusiastic than others when it comes to sharing the intimate details of your reproductive health on the interwebs. Fair enough. You don’t have to post about your tipped uterus or difficulty finding the string that assures you your IUD is still in place.

[Note: sorry if you are squeamish, but you need to know that women have these kinds of issues, which is exactly why we cherish our ability to visit the doctor and get help. The personal is still political.]

Alternate topics that still get the point across:

Feel free, also, to make connections about the subjugation of women through denying them access to equal and affordable healthcare and the subjugation of Latinos and African-Americans by denying them equal access to the polls. (One idiot commenter on the gov’s FB page helpfully pointed out how cheap an ID is. Perhaps she missed the day in school when the poll tax came up.)

But clearly, sadly, we do, so we must.

To those who say that snarky comments on Facebook aren’t accomplishing anything, you are wrong. Like it or not, Perry is using social media to spread his propaganda, so we must use it to counter those misrepresentations, to show him that his lies will not go unchallenged. It is always a worthwhile endeavor to say the truth in public and to speak truth to power.

It might be enough to get him to stop using Facebook as a forum for his smarmy political gamesmanship, and that would be a victory.

It has definitely helped keep this issue in the media, and reminding people just how reactionary and anti-women Republicans are is critical in this election year.

You need to be ready to do more than vent on Facebook, too, but don’t discount the power of social media.

Want to do more?

But today, don’t try to do it all. Just go and leave a comment on Rick Perry’s Facebook page. Strike a little blow for truth and justice. Onward!