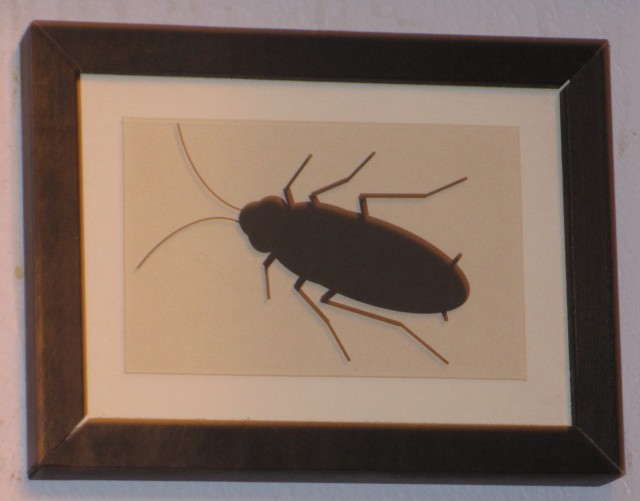 Some fear them. In Houston, we frame them.

I’m sitting here trying not to have what Far Side cartoonist so aptly called a cumulative attack of the willies. [The cartoon showed the janitor at the zoo in total meltdown mode when, after years of mopping up in the reptile house, the willies finally get him. Gary Larson, by the way, has done a bang-up job of keeping his cartoons off the interwebs!]

I’m listening to our tiniest tenants trying to claw their way into the kitchen, and distracting myself by thinking about the amazing tales of plague and infestation we shared at dinner last night.

When it got cold a few days ago, squirrels moved into the southwest corner of our attic. I haven’t seen them or anything, but I’m fairly certain they are there. I hear them during the day.

I’m listening now to something in the wall between our bedroom and kitchen, and it is dark out, which means, I am afraid to say, rats. I’d like to say mice or raccoons, but let’s be honest. Rats.

I know that, since we live in a pier and beam house, we get tiny illegal sub-lessors every time it gets cold. Doesn’t make it any easier sitting here listening to the scratching and almost fluttering sounds. There’s no evidence they are coming inside, and that fact, along with the incredible strength of my girlfriends who managed not to melt down too much while we told our stories of plague and pestilence last night, is preventing me from running back to bed.

2 Responses to Our Tiniest Tenants