I find Greg Abbott’s campaign trope, Wendy Davis wants to turn Texas into California, laughable and sad, one more example of a Republican running on fear and culture wars instead of engaging over substantive issues.

Could Texas ever cease to be Texan?

You let me know when the King Ranch Ranch Hand Breakfast menu dumps bacon, beans, and biscuits for kale smoothies and TVP tacos, and then we’ll talk about Texas turning into California.

In the meantime, we are at risk, thanks to years of Republican gamesmanship, of having certain parts of our state revert to the 19th century.

I met a man last week who works in oilfield services, and has traveled extensively in central Asia—Uzbekistan, Kazakhstan, et cetera-stan.

I brought up politics, because it was either that or sex and religion.

I shared with him Sen. Leticia van de Putte’s observation on TxDOT’s decision to allow miles of roads that have been torn up by traffic generated by the boom in the Eagle Ford Shale revert to gravel since they lack access to enough funding to do a modern paving job:

“As if they think that you can grow a 21st Century economy on 19th Century transportation system,” she said. “Doesn’t Texas deserve better than that?”

My conversational partner explained that he’s been down to the Eagle Ford Shale country, and the roads there are as bad as or worse than any he’s had the discomfort to rumble and bump over in the central Asian republics he’s visited. He was shocked to hear that our state government’s response to the wear and tear generated by a booming industry would be to revert to gravel roads, a devolution of technology that would directly impact the very sector of our economy that is buoying revenues for towns, cities, and counties in desperate need of good financial news.

Greg Abbott is apparently going with his strategy of trying to stoke the embers of a culture war pretty much everyone else is tired of fighting.

The rest of us need to focus on the fact that without a serious change in budget policy and leadership, we can forget about California. We’ll be living in a state with the infrastructure of an impoverished country like Kyrgyzstan and no way to compete in the modern economy.

Now, I enjoyed watching Frontier House on PBS, but I don’t want to live there.

That is one of the many reasons I am voting for Wendy Davis and Leticia van de Putte, and encourage you to do the same. 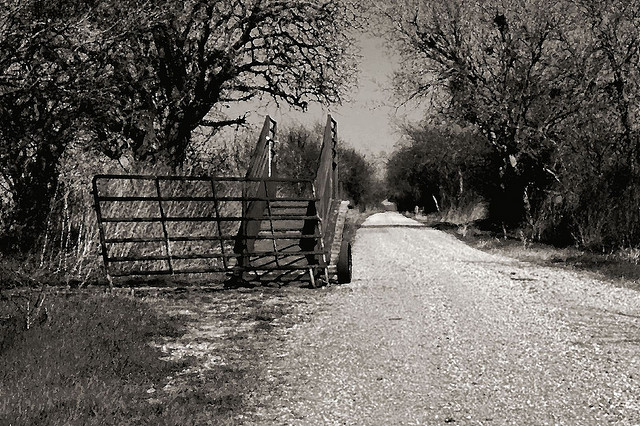 Along a Texas road – good for art photography, not for heavy equipment or commerce. Photo courtesy of Old Grey Mare via Flickr.