Posted on April 8, 2010 by nonsequiteuse

During the Yankees v. Red Sox season opener Sunday, another head-t0-head competition raged at Cake v. Pie. In the first round on the pie side of the bracket, Grasshopper Pie faced down Chocolate Diner Pie. And lost.

I selected a traditional recipe for the Grasshopper Pie*, by which I mean I used a recipe with cream, eggs, and gelatin instead of marshmallow fluff or that petroleum byproduct of our youth, non-dairy whipped topping. Shudder.

Grasshopper Pie speaks to me of post-WW2 manic optimism and prosperity with a sinister dash of duck-and-cover paranoia. The ingredients are a total break from those lovingly baked into cobblers and slumps in cast iron skillets over open hearths by our wholesome frontier foremothers. No tree-ripened fruit or just-foraged pecans here! Just gelatin, liqueurs as sophisticated as an aging divorcée in a Palm Springs cocktail lounge, and cookies with an ingredient that, by law, cannot be described as cream.

The greening of the pie came entirely from the creme de menthe, as I am not entirely sure about the age of the food coloring in my cabinet. While the liquor store had several price points for the two liqueurs, I went with the value-priced bottles, assuming that, much like tequila or rum, if you are using a liqueur mixed with other ingredients including a heavy dose of sugar, going premium doesn’t really make a big difference.

Yes, the two liqueurs met and melded in one of my Topo Chico glasses, glasses acquired during the most complicated retail transaction to which I have ever been a party. A transaction which took place over the course of four days in, natch, Marfa.

Now being in possession of nearly-full bottles of creme de menthe and creme de cacao, I will at some point begin plying friends, acquaintances, and anyone walking past our house who looks at least arguably 21 with stingers, alexanders, and other cocktails mixed with said liqueurs.

You have been warned.

Here are some of the highlights of the creation:

I’m quite sure that the same petroleum byproducts I mocked above in reference to non-dairy whipped topping were used in the manufacturing of the Cool Mint Creme Oreos. Note the flecks of electric green creme filling still visible after pulverization of the cookies.

This is the egg/sugar/gelatin/cream mixture just after I poured the liqueurs into it. Or is it a small hawk that has just scooped up a baby bunny rabbit? What do you see in those mysterious green swirls? 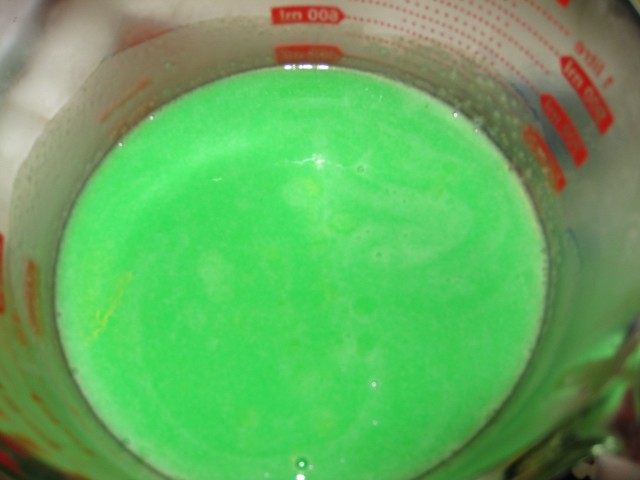 Clearly, the custard/liqueur mixture creates a color only seen in nature in the decorative stripes on certain tropical fish along the Great Barrier Reef.

Mixing in the whipped cream tones down the green considerably.

I think that one improvement I’d make in the future would be decorating the pie with Junior Mints, or even chopped pieces of After Eight mints. Dark chocolate curls would have tasted too wholesome, and milk chocolate would not have stood up to the taste of the overall pie, whereas the mints would vamp up a pie that is, let’s face it, already pretty tarted up with lurid green liqueur.

KEY ADVICE – make the filling well in advance. Even making it the evening before, a full 24 hours before it was served, the first bite had something of a medicine/mouthwash taste. It went away, but if you believe the first bite is the one that counts, this may not be the pie for you.

*The blogger whose recipe I used did a tremendous job of creating a stunningly beautiful pie. I almost copied her and did mine in a tart pan, too, but knowing we’d be traveling with the pie, and wanting to minimize the number of serving plates used, I went with a traditional pie pan. Given the option of using a tart pan, however, I’d recommend it. The pie certainly stands up to the treatment, and displays itself admirably.

This entry was posted in eat this!, recipes and tagged cake v. pie, grasshopper pie, recipes. Bookmark the permalink.