Profile of a Wingnut: The Church Soloist

My strongest memories of Sunday School include the taste of Saltines washed down with watered-down red Kool-Aid, the smell of the crayons we used to color in all of those pictures from the bible lessons, and the aural chaos created by a certain young redhead and posse running around, hopped up on Kool-Aid, looking to score quarters for donuts in the parish hall.

I also recollect the occasional sing-a-long.  We WASPs don’t really belt anything out with feeling when it comes to church, but we rocked out a little bit with that song about Noah and the flood when the rain came for 40 day and nearly drove those CLAP animals crazy-crazy. 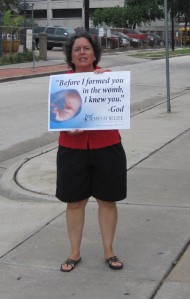 Can I get an amen, sister?

She’s been pounding the pavement every time I’ve been out on the old PP sidewalk.  But her pacing, though continual, is not what you notice about her.

She likes to sing.  She has a fairly decent voice – she hits the notes, and she’d make it through an American Idol audition without completely humiliating herself.

Her repertoire, however, leaves something to be desired.  Jesus Loves the Little Children. As far as I’ve noticed, she only sings the first 2 verses.

I do not engage the protesters, but I would pay good money to see someone else do one of the following:

It pays to procrastinate when it comes to publishing these profiles!  This Monday, on the sidewalk, The Church Soloist was conspicuously absent.  I talked to another clinic defender and learned that at the end of last week, she did add a new song to her repertoire, Happy Birthday.

The protesters treat every woman coming into the clinic as someone coming in for abortion-related services.  Percentage-wise, this is a losing bet, as abortion adds up to only about 7-8% of the services provided at Houston’s Planned Parenthood affiliate each year, but they labor on under the delusion that every sperm is sacred and every uterus is occupied.

Attributing far more intellectual capacity to this woman than perhaps I should,  I immediately assumed, when I heard she broke out into the song, that she sang it with sinister intent.  I assumed she thought she might cause pregnant woman entering the clinic to realize that terminating a pregnancy would mean no happy birthdays.

I will see if she continues to sing it.  Whether or not she does, I remain firm in my belief that none of Planned Parenthood’s clients – coming for any service – will make a decision about her healthcare based on the inflammatory signs and shaming shouts of sidewalk “counselors.”  Or singers.

The third of several Profiles of a Wingnut – character sketches of the sketchy characters I have encountered while volunteering as a clinic defender at Planned Parenthood.  You can read the introduction to this series here.