I bought figs for tonight’s cake.  I believe they are local.

I wanted to buy the adorable plums, which were perfectly ripe and the perfect shape for my cake, but they were from Italy, and that seemed an excessive distance for plums to travel just to get baked in a cake.  I’m sure someone will burst my bubble and reveal that spring is fig season in Houston, and these came from Australia and have the carbon footprint of a Yeti, but let the record show I was at least trying to be responsible. 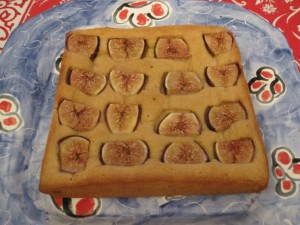 I will probably sift powdered sugar on top, which ideally will melt into the figs so they still show through.  I thought it best to put it up out of the way for a bit, because The Fluffy Menace was curious: 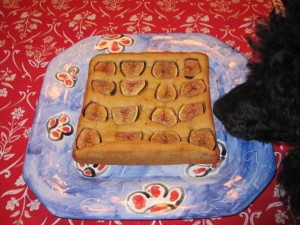 To those of you coming for dinner tonight, fear not.  You can see the blue space between The Fluffy Menace’s nose and the cake in this photo.  She did not actually touch the cake.

I cribbed this recipe from Smitten Kitchen.  The figs were one of two deviations from that recipe – I also used a mix of dark and light brown sugar because that’s what I had.

This entry was posted in eat this! and tagged cake, camera, cooking, poodles, the fluffy menace. Bookmark the permalink.