Profile of a Wingnut: The Logician

Posted on October 6, 2009 by nonsequiteuse

The Logician.  He wants to engage you in conversation about your beliefs, pretending to be a calm, rational person who genuinely recognizes that life is full of gray areas. 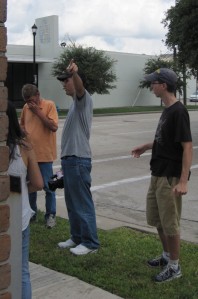 That's him, pointing, as he explains to several street people why they should join the protest.

Don’t fall for it.  He doesn’t believe in gray areas.  He believes in moral absolutes, and he will ask question after question until he draws you into what he believes to be a contradiction.

Law schools overflow with guys – and they are almost always guys – like this.

His alias?  Mr. Hypothetical.  He’s got more what-ifs than a four-year-old has whys.

Sadly for The Logician, he believes that it is possible to arrive at the right answer and, more annoying, that he knows that answer.  He just knows that his dazzling rhetoric will vaporize the blast door that you insist upon keeping up between you and the truth.

I’m guessing he doesn’t do too well in relationships.

The Logician reminds me of  a guy we encountered in the class we had to take at church before we got married.  The topic was compromise, but the meaning of the word was lost upon one class member.  He kept insisting to the priest that give and take was fine and good, but that at some point, the husband and wife would have to agree that one of them (hmmm, I’m guessing husband) would be the final arbiter of all things.  Right?  Right?

I often wonder how that marriage is going.

If you encounter The Logician, ignore him.  Smack a beatific smile on your face and fix your eyes on a point just over his shoulder.  Do not engage him in conversation, as this will only gin up his righteous indignation, making him at best, more annoying, and at worst, actually agitated enough to be dangerous.

The first of several Profiles of a Wingnut – character sketches of the sketchy characters I have encountered while volunteering as a clinic defender at Planned Parenthood.  You can read the introduction to this series here.